Jay Sorenson invented the “Java Jacket” in 1993 while working at a gas station. I love how he moved on from his original idea to one that actually solved the problem. 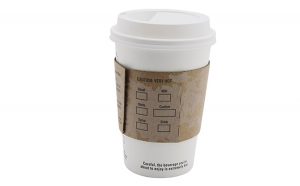 “Sorensen initially set out to design an insulated cup that could replace paper cups and Styrofoam cups, which were slowly being phased out as cities across the United States began to ban polystyrene food containers. But he couldn’t figure out an efficient way to package the cups for clients, neither nesting nor folding would work. He also reasoned, correctly, that not all coffee drinks needed that much insulation; his research indicated that only 30 to 40 percent of drinks sold at coffee shops required protection beyond the paper cup. Iced coffee drinks and lattes aren’t hot enough. The cup idea wouldn’t be economical for stores, it would have to go”. – Mark Wilson